Liberation Concert ,Johannesburg ,25th May 2018 compilation from PM801 on Vimeo.

Released on the 4th October in South Africa,,this is a project I have been working on for the last 18 months on and off. It culminated with a concert in Johannesburg on the 25th May. There will be more concerts in 2019 in Europe.

This unique concept album includes 37 songs and features 142 musicians from 18 different countries. The three volumes have separate themes, ie Celebration, Introspection and Inspiration, with the music on each CD reflecting the various moods both musically and sonically. The album was produced by Neill Solomon, Dan Chiorboli and Phil Manzanera.

The broader multi-cultural Liberation Project is proudly driven and anchored from South Africa and features a unique collaboration of musicians who joined forces to celebrate their liberation struggles from various different corners of the world with the main focus being on music from South Africa, Italy and Cuba. Musicians from countries as diverse as France, La Reunion, Guinea, Burundi, the USA, Brazil, the United Kingdom and others have contributed. International music heavyweights with human rights track records such as Phil Manzanera (Roxy Music & Pink Floyd), Juan de Marcos (from Cuba’s legendary Buena Vista Social Club), Cyril Neville (from New Orleans’ esteemed Neville Brothers), Italian icons Cisco Bellotti (Modena City Ramblers), Roberto Formignani (The Bluesmen) and pioneering DJ Miki the Dolphin as well as Guinean Kora master N’Faly Kouyatée
(Afro Celt Sound System) & Peter Gabriel are amongst the many who selflessly supported and contributed their immense talents for the cause. Our very own Sipho Hotstix Mabuse played an integral part and also performed in the inaugural Acoustic Band set at the Cape Town International Jazz Festival.

The arts kept the fire of liberation going. Music played a key role in both driving change and creating harmony during the Apartheid Regime. Music communicated messages through lyrics that had politically subversive meanings. Importantly so, it also allowed international audiences a view into the injustices suffered by the oppressed racial groups in South Africa.

Music united South Africans at a time where every other aspect of life was dictated by race and culture.

“With great pride this project offers us an opportunity to celebrate our fight for liberation to the world and offers a musical hand of solidarity and friendship to the countries and musicians who supported us during our struggle” comments Dan Chiorboli.

Also unveiled on the 3rd October was the DVD Live from The Mandela Stage at Joburg Theatre, which was filmed as the finale of Africa Month’s Celebrating Nelson Mandela’s Legacy. This Liberation Concert (supported by the National Arts Council of South Africa (NAC) and The Joburg Theatre), featured a line-up of artists including Mamelodi’s ‘The Voice’ Vusi Mahlasela, N’Faly Kouyate, Italian jazz singer Rossella Graziani, Cyril Neville and the album’s co-producer Phil Manzanera. Besides the all South African Liberation Project Band, rapper Stilo Magolide, guitarist Ernie Smith, gospel singer Pu2ma and jazz vocalist Zoë Modiga represented South Africa. The concert (and album) also paid tribute to Ray Phiri and Hugh Masekela ZA who sadly passed away during the making of the album. 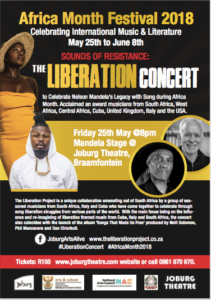 You can also listen on spotify here: The Liberation Project – Spotify

And you can watch the original EPK release here : The Liberation project EPK