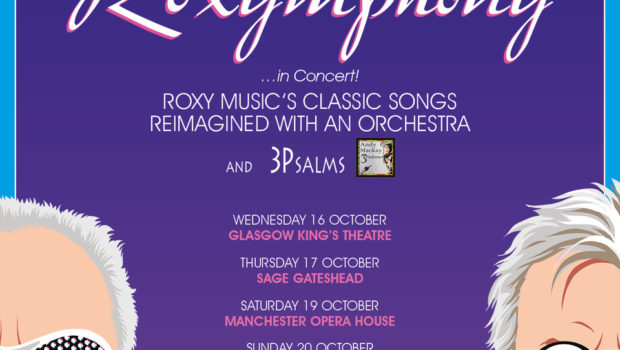 Roxy Music’s Andy Mackay and Phil Manzanera have today announced October 2019 UK tour dates for Roxymphony, their critically acclaimed concert of orchestral versions of many classic Roxy Music songs as well as 3Psalms, Mackay’s triumphant new album. Roxymphony, debuted last Autumn at London’s Queen Elizabeth Hall, and will be available later this year as a live CD/Vinyl and DVD. Tickets go on sale at 9:00am on Friday 3 May from AXS.com.

The concerts, performed by two of the UK’s best known musicians, will feature full orchestral reimagining’s of groundbreaking, era-defining Roxy Music tracks such as Love Is The Drug, Song For Europe, Sentimental Fool, More Than This, In Every Dream Home, Out of The Blue and more. The performance also includes Andy Mackay’s acclaimed 3Psalms album.

Roxy Music reunited in the US on March 29th to be inducted into the Rock & Roll Hall of Fame alongside Radiohead and The Cure.

Andy Mackay said: “Roxymphony was an idea that came from the fabulous possibilities of using orchestral strings and other instruments. I had already written the string parts for 3Psalms and it was incredibly exciting for me to assemble all the musicians for the premiere last year and to perform with Phil. Roxymphony was the natural partner and was so well received we felt we just had to do it again.”

Phil Manzanera said: “It’s great to be back on stage with Andy Mackay presenting Roxy’s music in a new context.  It was a revelation to us all how well-suited the songs were to being orchestrated and how much the audience at the QEH seemed to enjoy it…..we’re  now emboldened to hit the road and  share Roxymphony with more of our UK

Advance tickets can be ordered here: