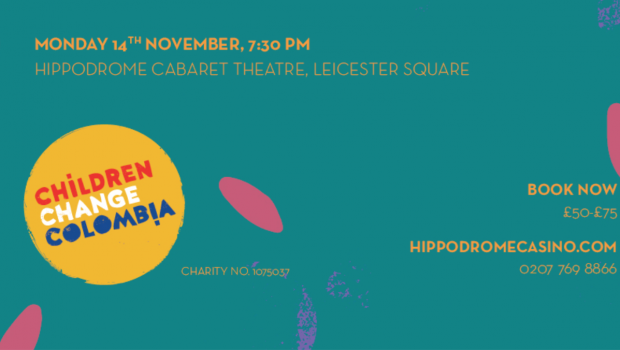 Phil Manzanera, of Roxy Music fame, Louis de Bernières, celebrated author, and Fernando Montaño, Soloist at The Royal Ballet and charity patron, will be performing with guest artists in aid of ‘Children Change Colombia’, the charity devoted to supporting children at risk in Colombia. This sparkling evening of music, words and dance is on 14 November at London’s Hippodrome Cabaret theatre.

Phil Manzanera said: “My mother was Colombian and so I’ve always felt a strong affinity with the country and its people. I’m delighted to support Children Change Colombia and the important work it does for children at risk there. I’m looking forward to playing with these wonderful artists on the night of the 14th and thank them for their support.”

Louis de Bernières said: “I spent a year in the Colombian countryside when I was nineteen, and it had an indelible effect on me. It was years before I felt British again, and I have taken an interest in Colombia ever since. Colombia has always suffered from child-related social problems, and for that reason I am delighted to support this charity.”

This event follows on from last year’s sell-out success hosted by Fernando Montaño, Royal Ballet star and charity patron. Children Change Colombia has been working since 1991 to defend children’s rights in Colombia, it works with local children’s organisations who have a proven record in defending the rights of children most affected by poverty, inequality and conflict.

Ticket are NOW on sale, details as follows: