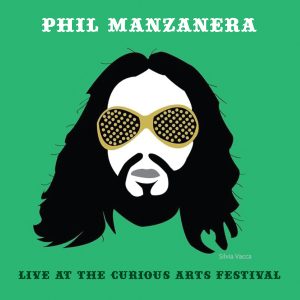 ‘Live at the Curious Arts Festival’ captures Manzanera and the band’s show stopping performance at this well-known UK literary festival, held in July 2015. The set list included storming versions of Roxy classics, such as ‘Take a Chance with Me’, ‘More Than This’ and ‘Love is the Drug’ with Sonia Bernardo giving these songs an electrifying new twist, she is indeed a star in the making. The band packed full of talent, many still in their 20’s, crackled and sizzled, inspiring Manzanera, whose playing on this set shows just why he is one of the world’s greatest guitarists.

The album set list is:
High Atlas
More Than This
1960 Caracas
Magdalena
Stormy Weather
Take a Chance with Me
Love is the Drug
No Church in the Wild
Let’s Stick Together

The bands next performance will be on the 14 th Nov at London’s Hippodrome theater in aid of Children Change Colombia tickets available from www.hippodromecasino.com

Phil Manzanera said:
“This is my most international band. It is so exciting for me to play with such a talented bunch of young musicians. I have to make sure I bring my A game to the party. You can never tell when magic is going to happen, and in this tent in the English countryside, it did!”

The album is available from www.manzanera.com