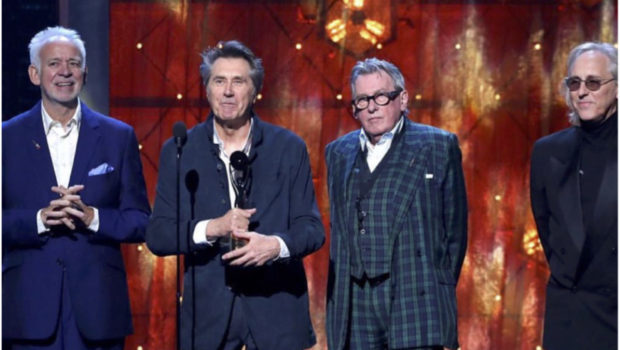 ROXY Music played its valedictory night in Brooklyn, New York on Friday 29th March. After rehearsals with Bryan Ferry’s touring band including the legend that is Chris Spedding, Fonzi Thornton and Tawatha Agee, from the original Avalon tour and Neil Jason who played bass on eight Roxy tracks on Flesh and Blood and Avalon, and the addition of the great Roxy veteran Eddie Jobson. The band performed for 21 minutes. The set was: In Every Dream Home a Heartache, Love is the Drug/More than this /Avalon medley and Editions of You. Simon le Bon and John Taylor from Duran Duran inducted ROXY and generously commented that without Roxy Music ‘there would be no Duran Duran’.

It was a great way to celebrate and bring the curtain down on 47 years of the band. Also inducted with us but sadly not there were Brian Eno and Paul Thompson. Also included in the citation was Graham Simpson our original bass player.

The show will be broadcast on HBO on 29th April but here are a few clips and photos taken by fans.